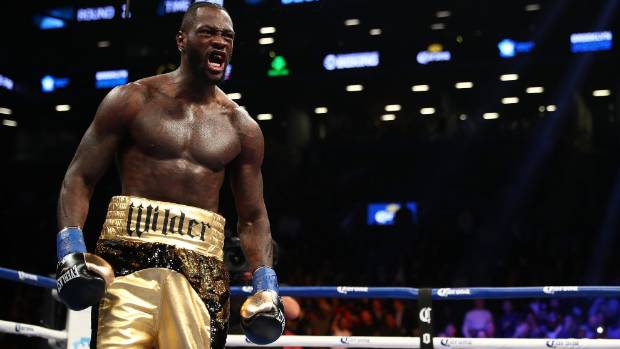 Floyd might be gone but his overtly defensive style has few mourners marking its passing.  Instead, fans are yearning for power packed punches that hit their target.  From the horizon has come a monster of a man who touches the heavens at six foot seven inches tall.  He has the World Boxing Council’s heavyweight championship belt.  More importantly is his 34-0 record with 33 knockouts is not the creation of cream puff opponents.  His name is Deontay Wilder and more than a few are relying on him to save boxing.

NBC benefits from this hype as Deontay defends a portion of the heavyweight crown on broadcast television for the first time before the boxer was born.  A french fighter makes his way to Alabama for this bout.  Johann Duhaupus is at least a credible opponent despite being a huge underdog.  He is 32-2 and has the fact that he has never been knocked down going for him.  If not for that, it would be hard to generate huge pop for this fight.  It is expected to be another win for Deontay who is facing small heat for not picking someone with a tad more prowess for this one.

A mandatory defense of Klitschko’s belt must be done against Alexander Povetkin before this deal could be inked.  This is more about career management and keeping the sport alive in the lean years.  Their camp says that they fight big then tackle a smaller bout before returning with another heralded opponent.  Theory comes into practice as if they had two or three years of great fights that there would be nothing left for four or five more to come.  They do have a point in the thin ranks of the heavyweight division.

So take a peek at the Prime Time Boxing broadcast Saturday evening at 8:30 PM.  The odds are too long for this one but you can scout Deontay for yourself.  Get your bankroll in position for when he and Wladmirr meet.  Enjoy this national broadcast on NBC and we will talk to you next time here at APEX Boxing Beting.