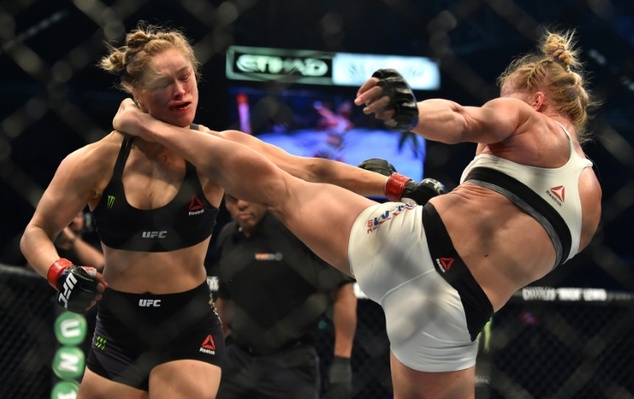 Holly Holm has stunned the world and now her comes shock value aimed at both her and opponent Rhonda Rousey.  See who 50 Cent alluded to when posting a very funny picture on social media after Rhonda lost her belt.  Also what business relationship has the new champ fielding some heavy questions very early in her reign.  Read all of this right now at APEX Boxing Betting.

One has to know that for the purpose of spite, Floyd Mayweather really savored Rhonda getting her head kicked in.  Not only that but he encouraged others to pile on the misery.  The articles main graphic was posted by 50 cent on social media he says by the behest of Floyd.  Even though he denies it, this has to be one of the images of the year for satire and originality.  Kudos!

Money is one thing but the champ should really cut this tie now that she adorns the belt. Intel – Pharma openly sell four substances that sell steroid alternatives and are banned by several monitoring agencies.  She can not claim ignorance in this matter as her coach has said on public record that both he and the champ were aware of what IP sells.  When one of the best quotes used to defend her is “I’m sure she didnt use any of them.  She might have taken a picture with one,” not going to make this easy to go away in an organiztion like the UFC with recent problems on the men’s side.

Rhonda gets the heat now because she generated so much of it herself in her time as Women’s Champ.  Holly has been more under the radar but it did not prevent Intel-Pharma coming to light.  Will this relationship continue?  APEX Boxing Betting will be with you all the way to report if and when this dicey sponsorship comes to an end.  Good fortune to you today and get those Cotto-Alvarez wagers in right now at America’s Bookie for the big November 21st fight.