Self Proclaimed Savior Tyson Fury Did Just That 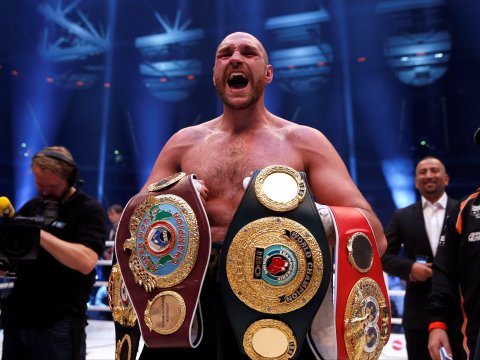 For more than a decade Wladimir Klitschko was the champion that no one wanted.  He was the unbeaten heavyweight champion that made Floyd Mayweather look aggressive.  A clinch laden style had dried up the viewership in the heavyweight division.  No more as Tyson Fury flapped his gums before the fight and did what few do, he produced the goods.  Learn the ramifications of his win from APEX Boxing Betting as we have a new heavyweight champion of the world.

Andy Murray brings home the Davis Cup in tennis and now Tyson Fury returns the belt home to England.  All week before we heard from the challenger that his underpants was of more interest than the champ.  A robot who all of Europe wants to see dethroned from his perch.  A unanimous decision came in from Germany which have the former champ even tweeting that he still did not believe that he lost.  Now the tallest champ is a hulk of a man at 6 foot nine inches tall, twenty seven years young, and an undefeated 25-0.

Do Not Quit Your Day Job

Maybe a little woozy because his choice of post fight antics was odd.  He took the mic and crooned to his wife Aerosmith’s ” I Dont Wanna Miss a Thing!”  Let us just say that the European form of American Idol are not rushing out to get him on the show.  More than a little offkey but boxing needs a champ that looks a little foolish.  Part of what kept Tyson more than afloat was his antics.  Babe Ruth is beloved for his cigar smoking wearing a crown image.  Boxing needs personality and boy does it have it now.

In the end, the universal opinion of this fight has Big Upset Bad Fight.  Now there is a rematch clause and maybe Wladimir will throw a punch.  However the best fight might be Fury and Deontay Wilder.  The media circus and quotes before hand would be electric.  Let us hope that this fight goes off before the rematch.