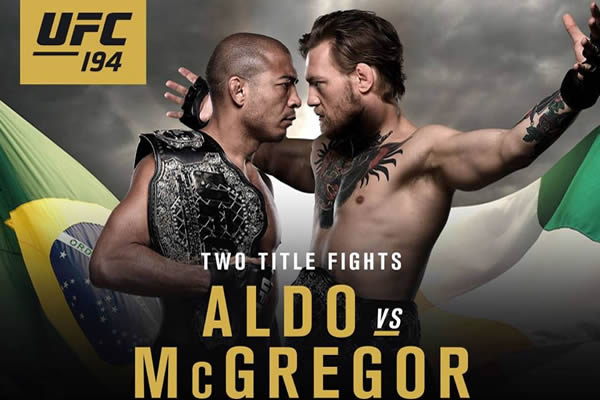 Following a blood bath from last night’s Fight Night comes the UFC 194 PPV that ends the year.  Headlining, we finally get to see Jose Aldo (25-1) take on Connor McGregor whom is more than a credible threat.  Aldo is not only risking his belt but a decade long winning streak whom with one more win can tie Anderson Silva’s streak of sixteen straight wins.  The opening line was set a little high on Connor McGregor to offset an anticipated high level of wagering from Europe.  Now with the line becoming near a pickem, which way will APEX Boxing Betting judge the wins to blow in this slobberknocker of a fight.

Not many people can keep up with the vertical game of Connor McGregors.  All his punches have a flow that seemingly connects all the time.  He has over five punches per minute that find their mark and this is the highest rate in the featherweight division.  Jose Aldo has the power and counter punching ability to offset the flurry of combinations that come his way.  With this aspect near a wash, what is the exploitable factor in this fight?

Jose Aldo has had to face a flurry of criticism as of late saying that his ground game is overhyped.  For his level of belt he should be doing better in UFC for his ground game among other over the top comments.  Look at this video and judge for yourself.

This is a lot better than what Connor McGregor produced in his last fight with Mendes.  This is the one advantage that either fighter has over the other.  Vertical it is a wash but on the ground and the conditioning of Connor goes out the window.  Jose Aldo is a big favorite on the ground in this one.

APEX Boxing Betting’s Free Pick is Jose Aldo at -105.  Lock in the price right now at America’s Bookie.  This should be a fight of the year candidate.  So get you all your snack, bet the Free Pick, and enjoy the PPV on Saturday evening.  Good fortune and we will talk to you next time here at APEX Boxing.